A study has found a specific 20-minute exercise programme can reduce injuries in teenage rugby players by more than 70%. Experts from the University of Bath say they are excited by the dramatic findings, which are to set to be implemented across all levels of the community game by the Rugby Football Union before next season.

According to the benchmark study, published in the British Journal of Sports Medicine, researchers found overall injuries fell by 72% when players completed the newly devised exercise session at least three times a week, either just before a match or before training. Concussion injuries were also reduced by 59% in a survey that involved monitoring 40 schools nationwide and nearly 2,500 players aged 14 –18. 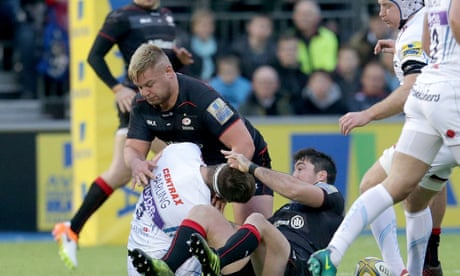 The training programme was developed by the research team as part of the study. It focuses on balance, strength and agility in order to better prepare players for the physical challenges of the game and to mitigate injury risks. Split into four stages it takes roughly 20 minutes to complete. This comprises a running warm-up with change of direction activities (two minutes), lower-limb balance training (four minutes), targeted resistance exercises (eight minutes) plus jumping, side-stepping and landing exercises (six minutes).

Professor Keith Stokes, who led the RFU-commissioned study, admitted the figures, the result of a year-long focus on rugby-playing independent schools where accurate injury data is more readily available, were eye-catching. “Our results are exciting because they show that carrying out a simple set of exercises on a regular basis can substantially reduce injuries in youth rugby,” he said. “We believe these findings will have a significant impact in helping to improve player welfare, making the game safer for young players to enjoy.”

Stokes believes the secret could be the shift from traditional pre-match stretching to exercises better designed to strengthen muscles around joints such as the knees and promote core stability. Strengthening the neck muscles would also appear to help reduce the incidence of concussion in young players. Instead of one or two players per team per year suffering a concussion, the study found the rate dropping to nought or one per team per year. Improved awareness and better tackling technique are also thought to have played some part.

Dr Mike England, the RFU’s Community Rugby medical director, said: “The results are impressive and we hope that a related study showing similar effects in the adult community game will be published soon. The RFU plans to roll out this approach across the community game in England and we will be training our local delivery workforce to help clubs and schools adopt this type of training and realise the potential benefits for players.”

… we have a small favour to ask. More people are reading the Guardian than ever but advertising revenues across the media are falling fast. And unlike many news organisations, we haven’t put up a paywall – we want to keep our journalism as open as we can. So you can see why we need to ask for your help. The Guardian’s independent, investigative journalism takes a lot of time, money and hard work to produce. But we do it because we believe our perspective matters – because it might well be your perspective, too.

I appreciate there not being a paywall: it is more democratic for the media to be available for all and not a commodity to be purchased by a few. I’m happy to make a contribution so others with less means still have access to information.Thomasine F-R.

If everyone who reads our reporting, who likes it, helps to support it, our future would be much more secure.